About The Hobart Clinic Association

Originally known as St Michael’s Priory, the Hobart Clinic came from humble beginnings, operating as accommodation for former Royal Derwent Hospital patients. Seeing the need for care, Dr Paddy Burges Watson led a group of health professionals to establish Seven Acres Pty Ltd. A therapeutic community was born and The Hobart Clinic came into being on 30th June 1984 as a benevolent institution. The Hobart Clinic Association took over the control and management of the Clinic.

Over the years, surpluses are dedicated to the development of the facilities for patients, doctors and staff and today we operate a 27 bed single room with ensuite facilities, set in beautiful gardens.

The current medical consulting suite was opened in 2003, known as the R A Pargiter Consulting Suite, after the then Clinical Director Dr Russell Pargiter.

As a not for profit private mental health service we are driven by the demands of the community first and foremost, our unwavering commitment over the past 30+ years will continue for at least the next 30!

The Constitution of The Hobart Clinic specifically states that any profits can only be spent either on necessary improvements to the hospital or in support of mental health in the community. In recent years extensive rebuilding and refurbishing has been undertaken with surpluses that have been generated. No Association member or Board member has any financial interest in the Clinic. There are no shareholders. The Clinic is truly owned by the community.

Unfortunately as a society we are confronted by a growing number of mental health issues and as an organisation we strive to respond with the latest treatment programs. For example, we know that alcohol and drug problems resolve best when people have real ‘time out’. Our facility set on seven acres on the Eastern Shore provides a place for the individual to commence their recovery journey.

The development of a specialist clinical team together with a therapeutic environment that is unparalleled in the State, brings to fruition our aim to be the treatment centre of choice for addictions.

We know that older people are more at risk of developing depression if they have recently suffered the death of a spouse or are living with major health problems. Our purpose built 8 bed unit designed for older adults forms the basis of further program developments in the aged space.

In 2008, the development of general and specialist mental health services were high on the Clinic’s agenda and the Clinic was awarded ‘Excellent Achievement’ by the Australian Council on Healthcare Standards in that year. Updating the Constitution and moving to a skills based board were also part of implementing best practice governance to take the organisation forward.

The Clinic had often discussed opening a centre in Hobart and in 2013 it commenced operating the Murray Street Clinic, with the official opening by the Minister for Health, The Hon Michael Ferguson MP in 2014. The new Murray Street Clinic represented ‘the development of a broader mental health service’, said Mr Harry Wilsdon (Chairman) at the opening. In July 2018, The Clinic moved Mind Hub to our current city location, 1/175 Collins Street.

Our Rokeby hospital is on Trumanyapayna Country. In palawa kani, this roughly translates to kangaroo point of land. We thank the Tasmanian Aboriginal Centre for their research in place names, which allows us to respectfully acknowledge the Country that our hospital is built on. The Mumirimina people originally resided here and we acknowledge the traditional custodians of the land at our formal meetings.

Our City MindHub location is on Nipaluna Country. According to the Tasmanian Aboriginal Centre, this is the name known by the Aboriginal people of the south-east for this country. The town came later, in 1804, and it was well established within nipaluna by the time that Wurati first told the name and its meaning ‘country at Hobart Town’ to Robinson as they approached the area on 16 January 1831.

To discover the place name of where you are, please refer to the Tasmanian Aboriginal Centres place names map. 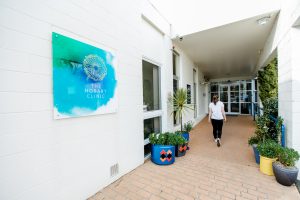 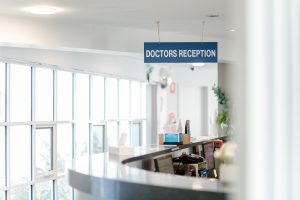 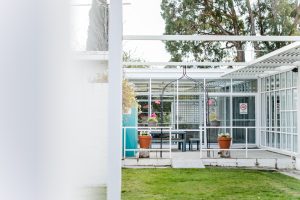 A History of Excellence in Care

The Hobart Clinic Association was formed.

Full accreditation confirmed for a period of three years.

The hospital was extensively renovated and re-developed at a cost of $300,000.

Further developments were made including increased kitchen and dining areas, administration block, boardroom and entry foyer.

New accommodation wing was added resulting in the hospital being a 21 bed private psychiatric hospital.

Creed and logo “Time for Healing” was adopted.

Moved to providing our own ECT services at Hobart Day Surgery. 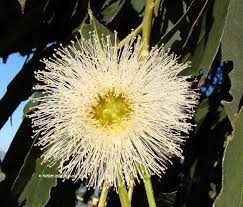 The Blue Gum Flower (Eucalyptus globulus) is the inspiration for our logo. It is endemic to our area and is the floral emblem of Tasmania. The logo shape represents connections and a circle of support (family and community), while the bright yellow symbolises hope.